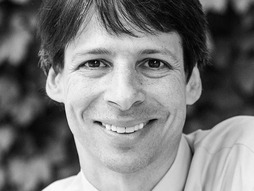 Arthur Benjamin makes numbers dance. In his day job, he's a professor of math at Harvey Mudd College; in his other day job, he's a "Mathemagician," taking the stage in his tuxedo to perform high-speed mental calculations, memorizations and other astounding math stunts. It's part of his drive to teach math and mental agility in interesting ways, following in the footsteps of such heroes as Martin Gardner.
Benjamin is the co-author, with Michael Shermer, of Secrets of Mental Math (which shares his secrets for rapid mental calculation), as well as the co-author of the MAA award-winning Proofs That Really Count: The Art of Combinatorial Proof. For a glimpse of his broad approach to math, see the list of research talks on his website, which seesaws between high-level math (such as his "Vandermonde's Determinant and Fibonacci SAWs," presented at MIT in 2004) and engaging math talks for the rest of us ("An Amazing Mathematical Card Trick").


"Mathematics can be a difficult and perhaps puzzling subject for many. But watch in amazement as one of the world’s fastest human calculators shows his ability to turn math into magic."