French President Nicolas Sarkozy has ramped up the anti-immigrant rhetoric in recent days, telling a TV audience last week that France has "too many foreigners" and offering to cut the number of immigrants admitted to France by half should he be re-elected to a second term. Then on Sunday, before a monster rally in a stadium near Paris, he threatened to suspend France's participation in Schengen, Europe's internal borderless-travel zone, unless it is reformed to better keep out the great unwashed.

Even in France, it rarely gets more cynical than this. The attacks on immigration are an attempt to woo supporters of Marine Le Pen's xenophobic National Front ahead of the first-round poll on April 22. Mr. Sarkozy trails his Socialist rival, Francois Hollande, 29% to 27%, according to a recent poll for Paris Match magazine. Ms. Le Pen comes in third at 17%. Little wonder that's where the Sarkozy camp is now mining for votes. 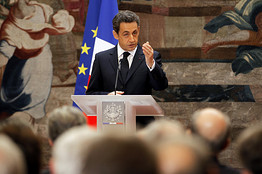 Still, the immigration talk is mainly a cover for French anxiety over their increasingly rickety welfare state. Mr. Hollande's answer for keeping the system afloat is a 75% top marginal income-tax rate, which may do something for emigration but won't do anything to improve France's budgetary health. Mr. Sarkozy, by contrast, argues that "at a time of economic crisis, if Europe doesn't control who can enter its borders, it won't be able to finance its welfare state any longer."

This is an ugly thought, not only for the ugly sentiments on which it plays but also as a textbook example of economic illiteracy. Not least among the threats to France's welfare state is an aging (and increasingly long-lived) population and a birth rate that—while the highest in Europe—is still below the replacement rate. Barring fundamental cultural changes, only immigration can maintain an active work force large enough to pay for the growing rolls of pensioners and dependents.

The real task for the French government is to ensure that those immigrants are assimilating properly, and to create economic conditions in which they can thrive with the rest of France. Mr. Sarkozy no doubt understands that. But we wonder if Mr. Sarkozy also understands that transparent displays of cynicism like this one have brought him to his current political predicament.